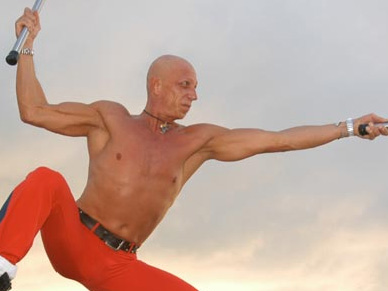 If you live on the key you know this guy: he wears spandex and he’s as tall as a house. He rides in a Hummer painted with the colors of the American flag, and at the fourth of July parade he rides atop said Hummer thrusting his pelvis at all the key mommies. It’s absolutely hilarious and absolutely overwhelming at the same time.

The guy was in a band named Tyrant, was a firefighter for a long time, and now he’s all about fitness. He seems like an accomplished guy, but his “eccentricities” are definitely what you notice when you first see him.

So now I present you with this awesome video.
http://www.youtube.com/watch?v=2BkdSmEcK9U

You can see more of this stuff, and learn more, at his website: The Body Studio

Hit the jump for one more badass video.

Does this guy pull girls or what? Every girl thinks of this guy while getting ready to go out.