The Key was a beauty; I should’ve known she was a heartbreaker

So in the past couple of posts I’ve come out in praise of some of the new offerings that have appeared on the Key. I may have been a little hasty in my assessments, and now I have to backtrack.

One way you can think about the Key’s establishments is as follows: Good Product, Good Service, Good prices. There are few establishments on the key that have more than two of those qualities, and it seems some of these new places are no different.

Let’s start with Entre Pues. I can still say the food is good, and I can also say that the prices are good, but the service has been short the last couple of times I’ve been there. I’ve also had friends relate similar experiences to me. One time they didn’t have hamburgers, another time they didn’t have anyone working delivery at 8pm, and another time they took an hour to bring my food while I was eating at the place.

The next place that I need to talk about is the Ibis Lounge. My hype for the place was huge, and I have to admit that it does deliver on many levels. Recently I went, though, and they told me their $5 beers were now $7; that it was just an opening week price. I went on Sunday at 8pm and it was closed. They have a good happy hour deal (2 for 1), but that’s the only kind of special there is and it ends at 8pm. It makes it harder to choose to go out when I can just pick up a sixer and save myself the hassle.

All that said, I still think these places are good. It also needs to be noted that business is business and business on the key isn’t cheap. After so many people came back to me with criticisms I just felt they needed to be addressed.

All that brings us to the following… 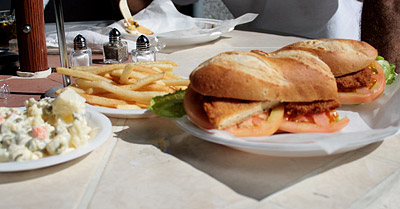 Patagonia in the Square. The new, new-place. The food was a little bland but it did have a good price and good service.

“their $5 beers were now $7” jesus, back in my day a nickel bag cost a nickel

In my opinion… just stick to the oasis.. solid price, solid food