My prayers have been answered: a hamburger & fries 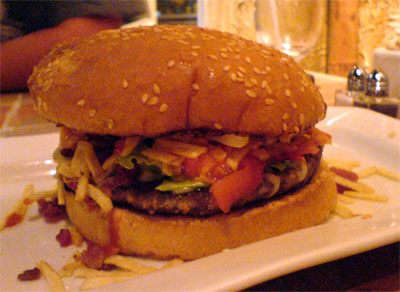 It’s happened. There’s finally a place on the key that will serve you a decent hamburger with fries, for under $10. I found it at a new Colombian restaurant in the Galleria. Before I get too excited and blow my proverbial load let me tone down my own hype and tell you what’s not good about it.

First thing to be said is that the burger isn’t cooked to order; it’s a cafeteria burger. That said, it’s way better than the DG burger or the Beach Club burger because it’s loaded with toppings that make the whole thing taste great. It’s got cheese, bacon, lettuce, tomatoes, onions, potato sticks (papitas), ketchup, mayo, and tartar sauce. Yea, you read that right: tartar sauce on a frickin’ hamburger. It’s crazy and it’s crazy good. The cheese oozes off the burger; it’s not some Kraft single, it’s something a little better. The potato sticks and the bacon add a little crunchiness to the whole thing.

When you first walk up to the place you’re not sure if it’s nice to the point where you should be better dressed. The decor and all makes it look like a more upscale restaurant than the menu suggests. Don’t let this throw you off, though. It’s as casual as going into the DG or Sir Pizza; walk in after a long boat day and no matter what you look like, you’re good.

Do not get worked up or turned off if the waiters initially approach you in Spanish and you can’t speak it. The place is brand new and Colombian, so the staff is primarily Colombian and I’m sure the guests right now are still primarily Colombian. Don’t let that deter you from getting what you deserve. Speak however you want and make them bring you that burger. Don’t forget to order the fries; they come on the side.

You’ll have to try it for yourself to be sure if it’s as good as I say, but I doubt you’ll be disappointed. Too lazy to head over there and check it out? No worries, they deliver! A hamburger and fries delivered to your house for $10. We truly live on an island paradise now.

The place is called Entre Pues and the phone number is 361-5486. Click here to see the entire menu.

mmm looks delicious i’ll have to try it when i get back.

i see the cook regurgitates it onto the bun for you. thats dedication.

Rafa, were you an English major? I noticed your use of the semicolon. I think you need a chocolate shake to go with that burger.

Nope not an English major. Hell, I don’t have a degree in anything at all.

It sounds lame but I have a thing for grammar and linguistics. The semicolon happens to be my favorite punctuation mark; it’s very well suited to casual dialogue.