Zoning Voting Back on the KB ballot 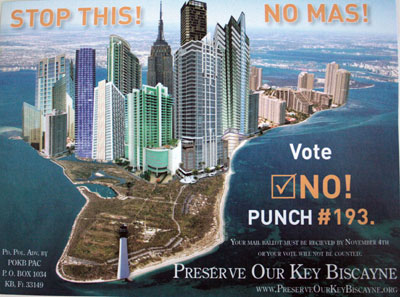 As much as I’d like to make my case here on Rat Radio about who I want for president, I’ve told myself I’ll refrain. There are some issues which I have no problem endorsing, though, and the zoning laws of the key is one of those issues.

Back in June 2007 Key Biscayne voted to make all major zoning changes require voter approval, and it passed by a landslide majority. The council was notably upset by this; it stripped away one of their most important powers. It basically paralyzed the council to deal with zoning.

When it happened it was largely in response to the new Sonesta plans and what was deemed extreme negligence on behalf of the council towards what Key Biscayners really feel makes an island paradise. I have to argue that it’s a good thing we have the right to vote on zoning changes. While it makes the council ineffective in dealing with these problems, that’s exactly what we want. We don’t want a council that can easily make huge changes to the key without approval. We want a council that has to take a lot of time to make big changes. We want a council that has to present a case that is appealing to Key Biscayne residents, not just to Key Biscayne business interests. I have no doubt that bigger means better for Key Biscayne businesses, but I feel that residents get the short end of the stick in most of these cases. By making sure we have to vote on zoning changes it makes sure the council has to sell the idea to a majority of residents, explaining why it’ll be good not just for business, but for everyone who lives here. It also needs to be said that the more money is made by Key Businesses, and the more residents there are on Key Biscayne, the more power the council has. So, in a sense, the council is biased towards making the key bigger.

If you agree with what I’ve said here, make sure you vote NO on reform referendum #193. If you vote yes to give power back to the council, all you’re doing is taking away one of your rights.

Of course the council wants to be able to change zoning. Thats what happens when the whole damn council are real estate agents, and the mayor works for the biggest real estate agency on the key. And that agency is owned by a investor of the Sonesta. hmmmm sounds SHADY. I say we need to vote on everything the council does.

I cannot vote but if I could I would say NO!!!

voted today!!! say no foo…waited in the rain and everything, need a medal atleast they gave out free refreshments and chips at gables library.

as much as id like to put barack obama in office, let’s never forget these guys are all tools.